LED vs. HPS: What’s the difference?

Several years ago, the photobiologist, Dr. Keith McCree, mapped the usage of photons that trigger photosynthesis in plants. The McCree Curve, the authoritative reference on measurement of light as it affects plants, commonly known as Photosynthetically Active Radiation (PAR) can be seen in Figure 1. This curve clearly shows that plants will use light (photons) delivered across the entire visible spectrum for photosynthesis.

Several years ago, the photobiologist, Dr. Keith McCree, mapped the usage of photons that trigger photosynthesis in plants. The McCree Curve, the authoritative reference on measurement of light as it affects plants, commonly known as Photosynthetically Active Radiation (PAR) can be seen in Figure 1. This curve clearly shows that plants will use light (photons) delivered across the entire visible spectrum for photosynthesis. 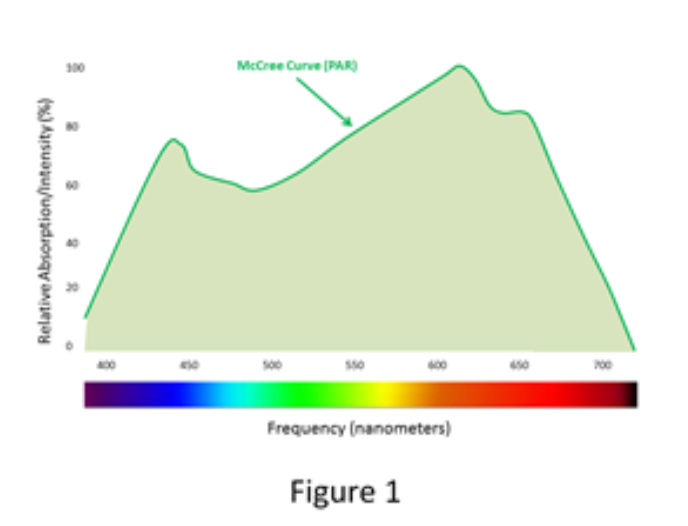 The sheer abundance of light produced by HPS lamps produces fair harvests in most plants, but almost all of the energy used by the technology is wasted, either as heat, or due to the aforementioned saturation of a plants photosynthesis centers (chloroplasts), seen as wasted light in Figure 2.

To insure effectiveness, one must follow certain rules when growing with LEDs and in doing so, can achieve up to 2x the yield of HPS lights, when measured in grams per Watt (gm/W).

In addition, HPS lamps get hot, some reach temperatures as high as 700°F! If you have even one of these in almost any room, the air conditioning bill will go up substantially to keep the room livable for your plants. 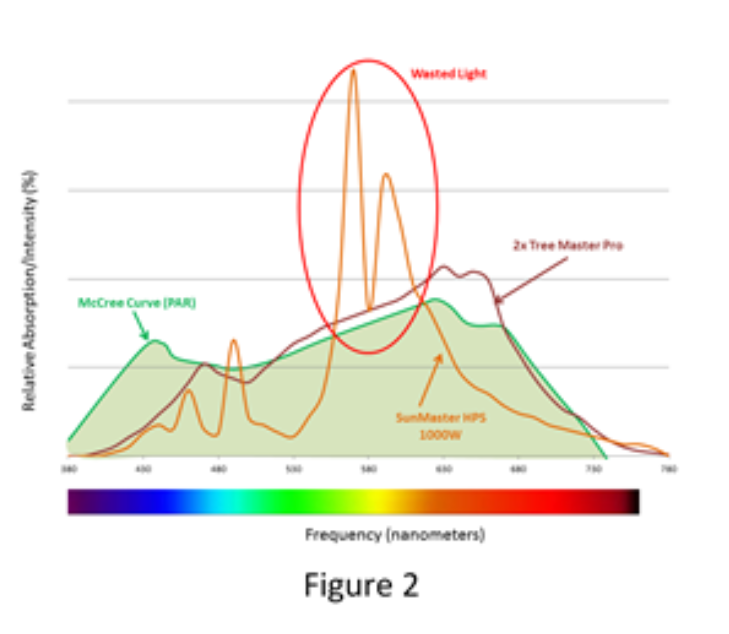 LEDs do not project heat towards your plants and in lights with great thermal design, excess heat is blown away from your crop. As LEDs are also much more efficient than almost all other forms of artificial light, the waste heat produced by them is far less than (especially) HPS lighting. This may present the need to provide supplemental heat to your crops, and in some cases, our customers have used small heaters to provide additional heat in colder climates. Because of lack of heat radiated towards the plants, LEDs may be placed much closer to plants, increasing photon delivery dramatically. As an example, when measuring photons delivered by an HPS light placed 2 feet above a crop (which is very close for an HPS) and again at 4 feet above the crop (more like it), the number of particles measured at 4”, is ¼ those measured at 2”, a 75% loss of photons! This is known as the Inverse Square Law in physics.

The light output of HPS lamps, even with good reflective hoods, is inconsistent. Light is misdirected and even canceled out. Anyone that grows with HPS lamps will recognize the center crop bump, or the area in the center of their crop, directly underneath the light, which grows taller and bushier than the perimeter. When applied correctly, our LEDs, because of use of high quality light gathering and focusing lenses, eliminate most of this problem. 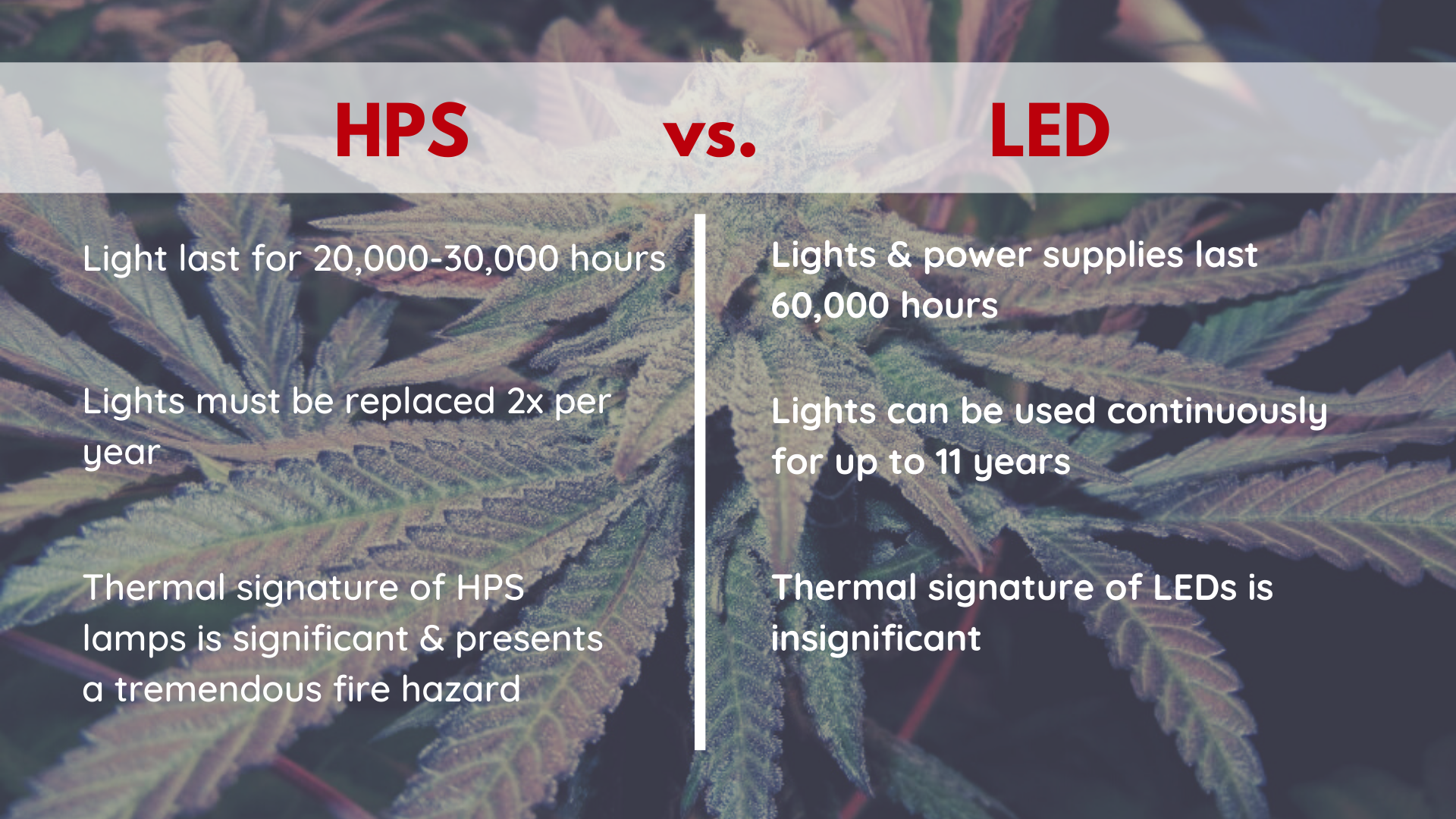 An HPS light consists of a bulb that produces light in every direction. The only way to somewhat control HPS, or any other High Intensity Discharge (HID) bulb, is to place it inside a reflector hood that shapes the output. Unfortunately, light bouncing inside the reflector assembly is subject to destructive interference, absorption of light into the reflector itself and attenuation of light through any glass or lenses it must pass through. The loss can be as high as 40%. In addition, light that makes it out of the hood is often cast outside the grow area.

80%-95% of energy used by an HPS bulb is emitted by the bulb in the infrared range (~850nm), which is invisible to the human eye but is felt as heat. This heat can damage plants, so the solution is to move the HPS light away from the plants. The Inverse Square Law for Light states (I’m paraphrasing) that every time you double the distance from a light to its target, luminous intensity (and photon count) is reduced by 75%! Growers generally place their HPS lights up to 3’-4’ away from their plants. This means that light measured at 48” away from the source is only 6.25% as intense as it is at 12” away from the plants.

LEDs are constructed to emit light in one direction, often in a 90-160 degree cone (steradian). Note: there are other LED constructions and outputs, but those are irrelevant to our discussion. Reflectors can be used to capture stray light from the sides and place it on a target. Total Internal Reflective (TIR) lenses can be used to capture almost every bit of light and place it in a very specific location. I have seen TIR lenses that produce a 4 degree beam angle.

LEDs produce less heat per Watt consumed than HPS lighting. That is not to say that LEDs don’t get hot – they do – but more power is used to produce light than with HPS lights. Our current LEDs are about 26% efficient, whereas HPS lights are from 5%-12% efficient. The heat produced by LEDs is drawn out the back of the device, usually to a heat sink which dissipates the heat so it may be removed by ventilation. This keeps the light-output-side of the LEDs cool enough to touch the plants without harming them. Accordingly, growers can place LED lighting much closer to the plants.